My name is Marama Stewart and I am the Principal of Waiouru School in New Zealand. "Everyday is a Learning Day" is about my experiences as a 21st Century Teacher, Learner and Leader. 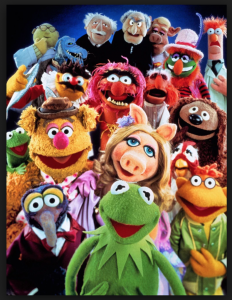 I wonder if he will ever read this …

David was famous for wall papering his DP’s entire office with colour photocopies of The Muppets. I believe his photocopy budget was much higher than ours. Another time he minded the entire school, for some strange reason I can’t remember, and showed the kids really stupid Youtube Videos that I don’t think anyone else would have got away with. He’s more comfortable in shorts than a tie.

He knew you well, and he knew what you could do better than you did yourself. He created opportunities for his staff to thrive. He made so many of us leave. From my ‘cohort’, three of us are successful Principals, and three are DPs in large schools, one is an ‘Across School Teacher’ and two others are Team Leaders.

He taught me to always make your Office Manager a cup of tea in the morning, and that a staffroom should be brimming with laughter, delicious food, and a room full of equals where you can sit down and chat with anyone.

We got him a good once during our special announcements at morning tea.  There were four of us young women on our staff around ‘child rearing’ age. One by one we each stood and announced the impending birth of our first child. OMG his face was hilarious, his look of genuine joy for us morphing into disbelief as you could see him calculating his potential staffing disaster. I think by announcement number four he was starting to cotton on but when our 89 year old librarian stood up to announce her pregnancy the whole staff just lost it (they were all in on the joke). You could see the relief wash over his face … but still double checked with us that we were actually joking. A very thorough leader lol.

He had a stern conversation with me once as a second year teacher. I had gone away for the weekend and had come back late Sunday night. I was exhausted and rang in sick Monday morning. On Tuesday, I can’t remember his exact words, but he made it clear that I had a responsibility no only to the kids but to our staff, our team. I needed to suck it up and get through because my slacking off put additional pressure on our team. I was so ashamed I had let him down. His conversation made me a better person.

He is kind and he would never make anyone do anything he wouldn’t do himself. He is more than happy to let others shine, in fact he encouraged it. He is hard working, honest, and funny. He knew me and how important my family is to me, and he helped me to shine. Thanks David.

A New Zealand Principal, living in Taneatua. Where's that you say? Just Google IT! View all posts by marama28