My name is Marama Stewart and I am the Principal of Waiouru School in New Zealand. "Everyday is a Learning Day" is about my experiences as a 21st Century Teacher, Learner and Leader.

These are two different kinds of change but excellent advice and can be used together at different points of the process.

How to get past the “it’s not going to happen wall”.
Not real reasons:

“I’m scared of the transition, not the idea.”
Helping people moving through the transition – three normal phases ‘the Negative – Interesting – Positive’

“I’m scared of the transition. I’m not scared about the idea.”
Everyone is scared of the unknown – keep people informed “yes it’s going to be bumpy and scary but we will get there”.

“I don’t see how I fit into any of this:
You give them authorship. You empower them to design the change for themselves. Suddenly they’re not responding to change, they’re taking control of change.
The tool: What did you keep? What did you chuck? What did you change? What did you add?

“Yeah, but people hate change.”
The truth is they want real change. They’re sick of believing something that isn’t real. They want something genuine. Questions to ask …
Is the change real or fake?
Is the change cultural or structural?
Is the change offered of foisted?

When working with a cynical, closed groups … 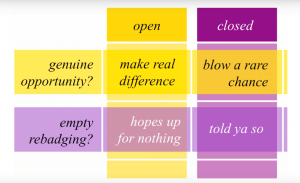 You can keep things the same or you can make a difference. But you can not do both. That is the choice you have to make. I’ve made mine, you choose yours.

A New Zealand Principal, living in Taneatua. Where's that you say? Just Google IT! View all posts by marama28